Is sometimes our problem as well.

We human beings, despite our efforts and accomplishments in mathematics and technology, can only visualize only a few objects at a time. The exact number depends on the objects, the differences in the objects, and the arrangement of the objects.

The number, therefore, can vary from perhaps as low as three to no more than 100.

So what does this have to do about chess? And why are we concerned about this fact?

The history of chess of chess is shrouded somewhat in mystery. It is known to have originated in India, about the year 700.

From there it traveled across Arab lands before it arrived in Europe in about 1485. The rules were updated to expand the powers of the queen and moves like en-passant and castling were added to speed up the game.

But we don’t know the person, or persons, who actually invented the game.

Therefore, this is a good  place to insert a myth.

A certain Sultan was concerned about boredom and indifference that was infecting him, his staff, and his army.

So, he called over his advisor to see what could be done. The advisor recommended a game that a slave, loyal to the both the advisor and Sultan, had recently invented.

The Sultan was intrigued about this and so he called over to the slave.

The slave told him that this new game of his was a war game that emphasized strategy and there was no luck involved; the winning player must earn this victory.

That intrigued the Sultan who began to ask questions about the game and wanted to play.

Of course, the Sultan won the first game of chess; the slave was a clever one.

After winning more games, the Sultan was full of praise for his slave. He asked him, “What do you desire for this excellent game?”

The slave thought for a short time before replying. He finally said, “Oh great and wonderful master. The only thing this humble servant want is to paid in grains of wheat, in which I can feed my family and perhaps make a small profit by selling the rest.”

The Sultan looked at him and replied, “I am a busy Sultan, so let me ask you one more time, what do you want for this game?”

The clever slave replied, “Master! All I ask for one grain on the first square on the chessboard, two on second, four on the third, eight on the fourth, and so on until the board is filled.” 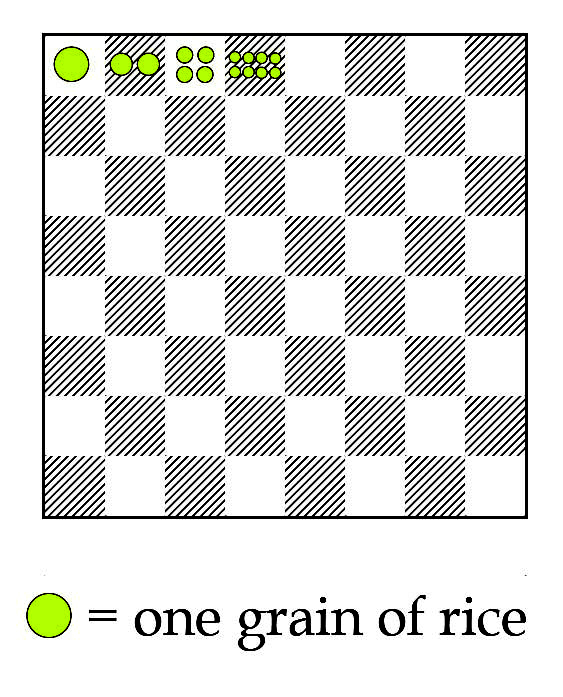 The Sultan smiled, and asked him, “Is that all?”

The Sultan called over his advisor and said to him, “Bring me a bag of grain for this slave and do what he asks”. The advisor bowed and walked to the grain room.

But, if you know exponential functions, you’ll realize that the advisor must have made many trips to the grain room and could never fulfill his task.

Here is a chart to help you.

For the actual numbers (and I know you want to see them!), please click on the following link.

This story is a fantasy. The sick are not.