There seems to be some confusion about underpromotions. Some players believe the rule for underpromotion goes something like this: “a pawn, upon reaching the eighth rank can be promoted to any piece”. This definition can produce some rather interesting problems. For example, it is White to move and mate in the following two problems.

Zuckertort?
White to Mate in 1 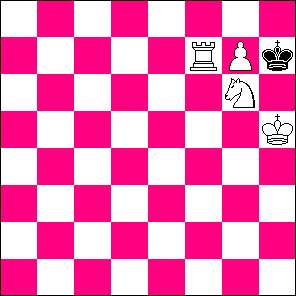 Unknown
White to Mate in 1

White’s first move in both problems is, of course, an underpromotion. Just not to his own color. In the first diagram, White checkmates with 1.g8=black Knight, while in the second, he mates with 1.bxa8=Black Rook.

The exact rule for underpromotion is that a player may promote to a Queen, Rook, Bishop or Knight of his own color.

There is at least one more misunderstood area of underpromotion. Some players insist that you may not legally promote to a piece that did not come with the original set. That means you could not promote a pawn if you still had your original seven pieces (Not counting the King; if you need to promote to a King it probably means that you’ve already lost the game). And you certainly could not have three Knights on the board at the same time. The pawn then must remain immobile after reaching the 8th rank.

However, the rule clearly states that you may have three (or more!) Knights. You can promote to a dark colored Bishop, even if your original one is still on the board. You may also have as many as nine Queens at the same time (eight promoted pawns plus the original Queen). In fact, the biggest obstacle to having nine Queens at the same time may be your opponent, who may not want to defend against the armada!

This may seem simple enough, but there is still confusion out there in the tournament arena.

The following is a game played by the author; 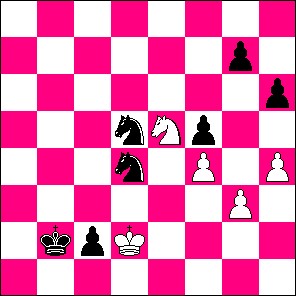 47.Nd3+ Kb1 48.Ke1 [48.Nc1? and Black can either play 48…Nf3+ or 48…Nf6 (with the idea of Ne4), winning in either case. Now back to the underpromotion theme. If Black promotes to a Queen, White would be forced to take the Queen with 49.Nxc1 Kxc1. The two Knights versus none are overwhelming, but if Black underpromotes then White could conceivably ignore the new piece. In any case, Black loses nothing by underpromoting.] 48…c1=N [Now White went off to the Tournament Director (TD), complaining that Black could not have three Knights on the board at the same time. And I should promote to a Queen. What did he expect to win by that argument!? The TD told him my move was legal and sent him back to the game. Where he promptly erred.] 49.Ne5? (Now three Knights versus one are better odds for White’s survival than two Knights versus none. But when White starts moving his Knight away, it becomes three knights versus none. And the White King is soon overwhelmed.) 49…Kc2 50.Kf1 Nd3 51.Nf7 Ne3+ 52.Kg1 Nf3+