… who is celebrating her 60th birthday today (Apr. 8). She is a Serbian player who earned her Woman International Master (WIM) in 1982. And won the Yugoslav Women’s Championship twice (1985 and 1987).

She does well in active piece play and unclear positions. Here are a few games of this still young woman.

[There is nothing wrong with this move of course. But 10…Na5 11.Bd3 b5 is more common. And Black still has to be careful.

One of the joys of reading old chess magazines is to enjoy the games from old tournaments as if they were new. One can also find many obscure games that many players may have overlooked, forgot, or have never seen.

An example of this is the 3rd Annual Women’s Tournament in Belgrade, 1967. This account was covered by Dr. Petar Trifunovich in the June 1967 issue of Chess Review.

Unfortunately, his article has a disparaging remark at the end of his otherwise excellent article. Writing about the older chess champions who must eventually yield their championships and glory to younger players, and the usual fluctuations in performance in tournament play, he states, “… : today, a woman player puts up a good game; the next day, she hands out gifts. But that phenomenon is easy to understand: the female is more subject to physiological mutations than the male.”

Today, we would like think that the male has more acceptance of the female than ever before. They have, and for the better of both. Is there more work to be done here? Yes, and quite a bit more.

Now it is time to get off the soapbox and back to the article.

This tournament seems to have vanished from history. I have tried to locate other games from this tournament to add to this week’s blog, but I cannot locate the tournament nor any additional games.

Right now, this blog would be only known place to find these games. Unless you have a copy of the June 1967 issue of Chess Review.

Just in case you couldn’t figure it out, I’m a male.

So how did I play in Women’s Team Championship? This is the story.

Back in 1989, the Southern California Chess Federation had a very active women’s group with their own league and some very good players. It was this year they had a  Women’s Team Championship.

But let me step back for a moment. It was in 1988 that I started to play correspondence chess. I only mention this because my opponent I was due to play was also a correspondence player. And being a fairly strong one at that (she was a Master in correspondence).

Back to the story.

I had several female friends that were playing in this match, so I decided to drive down and watch (and hopefully get a chance to cheer).

It soon became apparent to all the players that one of the participants had car trouble and couldn’t make to the event. How she made the phone call, I don’t know – this was in the days before cell phones. But news like  this travels fast and soon they were looking for another player.

After half-heartily looking for another female player (as most of them were already playing in the event), they decided to ask me. I think it was due because of my rating, and the fact that most of the other players personally knew me.  The two games I and my opponent were to play were to be rated but not counting towards the overall score in the match.

I agreed and my opponent, Dr. Christine Rosenfield drew White for the first game.

Now I knew she was a good correspondence player – but I didn’t know how good and I didn’t know a thing about her 1.d4 openings. Remember this is before cell phones, the Internet, and chess web sites.  I played loosely with my response, a little loosely as it turned out. She had a strong d-pawn in the middlegame and I couldn’t do anything about it. I lost the game. Badly.

So we take a lunch break. And we both chatted about game, as well as other games that were played in the first round.

After the meal and the chatting, we started the second game. I didn’t know anything about Christine’s openings, and I felt sure she didn’t know too much about mine either. I began with my favorite opening and played 1.e4.

Now I was in my territory.  I have always been good with tactics and this game featured  open lines, control of queenside and two pawns that couldn’t be stopped.

So we tied with one victory each. A good way to start off any friendship. But, if I remember correctly, she had to move to another state the very next year.

I enjoyed my experience and my games. I enjoyed my company and I got another view into chess. Dr. Christine Rosenfield has my respect. I’ve studied her correspondence games and learned how sometimes it is necessary grind away to victory. And how to use a very strong d-pawn.

Oh, that was an experience!

Here are some correspondence games from the Christine Rosenfield.

Christine’s forte was playing against the Dutch.

I play chess on chess.com. And I’ve read many articles by the members. Some are good, some are bad, and most of them are either interesting, funny, or informative.

And some are incredibly researched.

“Batgirl”, who is the probably the best in research, gave me permission to repost this article.

If you look on Wikipedia, or for that matter on almost any website that mentions it, including the official USCF website and the site of the US Chess Trust,  You will notice that all these places honor Adele Rivero as the first official U.S. Women’s Chess Champion for having won the first tournament organized for that purpose in 1937.

Inconceivably, perhaps, all these places are perhaps completely wrong. 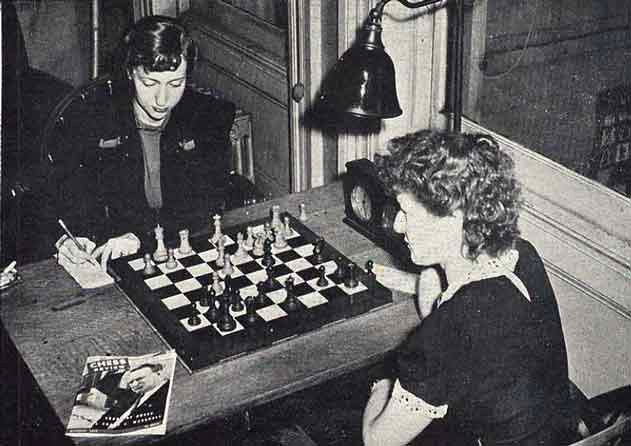 In 1904 and Carrie Kraus received an unexpected Christmas present. She met the man of her dreams. The New Year brought her a new name – Mrs. Frank James Marshall when, on January 5th, she married the man who a year later would be the premier chess player of the United States. It was perfect union. Caroline or Carrie as she was usually called, was pragmatic; Frank was a dreamer.  In 1915 Frank Marshall founded the Marshall Chess Divan which seven years later would be incorporated as the Marshall Chess Club. The Club found itself in various sites over the years but in 1931 it reached its permanent home in a magnificent old brownstone located at 23 West 10th Street, N.Y. By this time, Marshall had retired from international chess and was close to hanging up his U. S. chess champion crown which he had worn since 1909.

The American chess scene itself was in a state of flux and confusion. FIDE had established itself tenuously as the worldwide governing body of chess in 1924. Unlike the Soviet Union, the United States recognized FIDE, but America itself had no single, unified chess federation. Both the American Chess Federation (ACF), which could trace its roots back to 1900, and the National Chess Federation (NCF), established in 1927, claimed to speak for the American chess players. While much of the problem would be solved when they unified as the United States Chess Federation (USCF) in 1939, the intervening years would be marked by the contention between these two bodies.

The Western Chess Association had held tournaments, called the Western  Championships, each year since 1900. Then in 1934, it changed its name to the ACF. The Western Championships evolved into what today is called the U. S. Open. The “Chess Review” magazine, founded by Israel Albert (Al) Horowitz and Isaac Kashdan in 1933, was the “Official Organ of the American Chess Federation.”  When Frank Marshall retired from U.S. chess competition in 1936, he organized an invitational tournament specifically to determine the next U. S. chess champion. This tournament was sponsored by the NCF with the Marshall Club providing the trophy.

The Marshall Club, whose members were the wealthy, the influential and the elite, was, like most chess venues, a Men’s Club. But fortunately Caroline Marshall took an active interest in the club. One of her agendas was the establishment, not just of organized women’s chess, but of a women’s championship.  Starting in 1934 with the first women’s tournament of this period held in the Marshall Club, the goal of a U. S. Women’s championship was reached in 1938.

The first tournament, held in 1934, was won by Marjorie Seaman who breezed through with a perfect 11-0 score. Adele Rivero came in second with a 9-2 score. The 1935 tournament planned in the Fall had to be  postponed until Spring of the following year.   Adele Rivero won that 1936 tournament with a 5-0 score.

The first two tournaments were sponsored solely by the Marshall Chess Club, but the 1937 tournament was to be held under the auspices of the National Chess Federation itself with the intention of legitimizing it as a national championship.

In 1936 the plans for the 1937 Marshall Club women’s tournament included hopes that the winner would be the officially recognized leading woman player in the U. S. and that, as such, would be sent to participate as America’s representative  to the International Ladies Tournament in Stockholm, basically the women’s world championship, that summer.  Those dreams were only partially realized.

According to the preeminent women’s chess chronicler of that time, Edith Weart, after Adele won the 1937 tournament,  “As the tournament this year was sponsored by the National Chess Federation, Mrs. Rivero now holds the title of woman champion of that organization.” You may notice there is absolutely no mention of “U.S.  Women’s Chess Champion.”   In fact, the following year, Edith Weart wrote:  “Feminine chess takes a step forward with the announcement by the National Chess Federation that a tournament will be held in connection with the regular U. S. Championship tournament to determine the U. S. Woman Chess Champion.” This clearly indicated that the 1938 tournament, which was eventually won by Mona May Karff, was the first “title tournament.”

Also, Adele Rivero, the winner of the 1937 tournament didn’t go to Stockholm.  Mary Bain, who came in second, went in her place. The event was, of course, won by Vera Menchik.

The preliminaries for the 1938 tournament were to be held in March. In the February 1938 issue of “Chess Review”, Ms. Weart wrote: “Added interest is attached to the preliminaries, because they serve as a qualifying tourney not only for the Marshall C. C. Tournament, but, as well for the U. S. Women’s Championship.” Again, this makes obvious the fact that 1938 was to be the first year the tournament would be played for the national title.

The winner of the 1937 ACF tournament was Jean Moore Grau of Muscatine, Ohio. Mrs. Grau had the unusual distinction of having drawn against Alekhine in a blindfold simul when she was 17.   Grau proved unable or unwilling to make the arduous journey east  but proposed that she would like to meet the NCF winner someplace midway for a match to determine the best female player in the U.S.  This was agreeable especially since then the title would be the result of a consolidated effort. This match, however, never materialized and the invitation, even unaccepted, to participate in the 1938 tournament seemed to satisfy both organizations enough to declare that the winner of that tournament would be the U.S. Women’s Chess Champion.